What Is A Stack In Plumbing?

Learning new terminology is beneficial since it allows us to understand and modify concepts more easily. It's extremely essential when it comes to fixing things because you need to know where something went wrong before you can figure out what went wrong. That brings us to the plumbing stack, which is your home's drainage system's major artery. Because the plumbing stack is the primary artery, problems with it might cause difficulties with the rest of your home's plumbing. 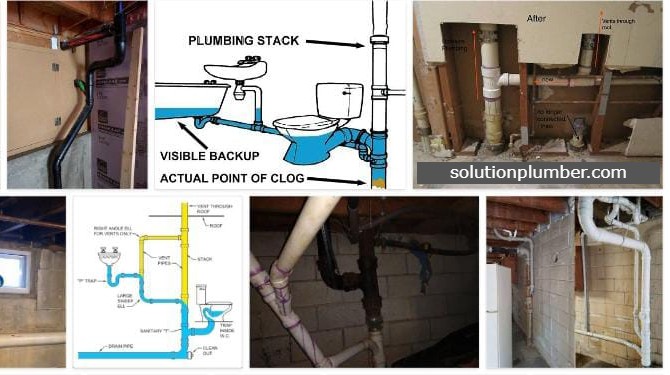 The stack is a primary drain line. It gathers and distributes wastewater from all of the smaller pipes to the house's main drain. The waste water then makes its way to the house sewer, the city sewage line, and finally the public sewer treatment facility. Private septic systems are still used in some regions. The plumbing stack is obviously a key aspect of this complex pipe network. This portion, also known as a vent pipe, protrudes forth through the roof.

HOW A DRAIN STACK WORKS

A plumbing stack is used to provide an air channel behind wastewater so that it can flow freely without gurgling. It permits air to enter and exit the pipe as needed. To prevent generating a vacuum, wastewater absorbs a large amount of air as it goes down the drain line. The vent serves as an escape route for odors and all harmful gaseous elements when the drain pipes are dry. That's why vents are installed above the roof line and out of sight.

Plumbing stacks are commonly composed of cast iron in older structures. It is a sturdy substance, but after about 80 years or so, it will begin to decay. Some older drain pipes are made of galvanized steel, which is vulnerable to rust, corrosion, and brittleness as it ages.

The plumbing stack is simply a very large drain that collects waste from all of your home's other drains, including sinks, toilets, and so on. Plumbers rarely use the term "plumbing stacks" because it refers to the entire length of pipe. You'll instead hear about vent stacks, drain stacks, and, on rare occasions, soil stacks. The vent stack is located above the home's topmost drain and permits air to enter the entire plumbing stack. The drain stack begins where the most expensive fixture drains into the plumbing stack and ends where the least expensive fixture drains into the plumbing stack. Everything below the lowest fixture is part of the soil stack, which is connected to the sewer.

WHY A VENT STACK?

Consider anything you performed as a child to better comprehend the vent stack. Put a straw in some liquid, cover the top with your finger, and pull it out with it still covered. The liquid does not pour out quickly as you might expect. It gets stuck in the straw instead. You can read more about it at the website, but the main notion is that by covering the straw, you eliminate air pressure, which would otherwise force the liquid down. Similarly, without the vent stack, there would be no pressure to push the liquid down and allow it to drain.

Plumbing stack issues are difficult in the home, but they're considerably more difficult in commercial settings because there are likely to be many more fixtures being drained. Call us for commercial plumbing in the United States if your business is having slow drainage from all of your fixtures; we'll get to the bottom of the problem and make sure your business isn't disturbed.

Replacing the main stack can cost anywhere from $1,500 to $4,000 depending on accessibility and length. Stacks made of brass, cast iron, or steel that are well-maintained can last for 70 to 100 years or more. PVC stacks are far more convenient to work with, but they only last 30 to 40 years.