How To Unclog and Clean Drains

The small thing like throwing coffee grounds in the sink that we do continuously can become the big thing that harms the home property. However, instead of calling the ‘plumber near me’, knowing how can and how to unclog drains by yourself is a good idea to defend yourself in solving the plumbing problems.

WHY DRAINS GET BLOCKED?

To guarantee that water drains away from the house properly, every home relies on adequate pipes and drainage. Obviously, if there is a problem, such as a blockage or a damaged pipe, this will not happen, and you may end up with waste water in your home or garden, which can be quite unpleasant. Like the mentioned before, throwing someting into the drain can end up by clogging drains.

We'll look at the most prevalent causes of drain difficulties below.

A clogged drain is a common problem that you want to get rid of as soon as possible. Many drain cleaners are available on the market that are quite successful; however, their efficacy usually comes at a price: they contain harsh chemicals that may be damaging to the environment as well as your family. 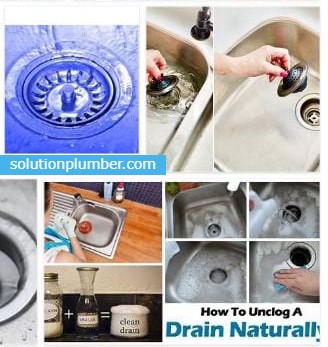 What if you want to unclog a drain naturally and without harming the environment? The good news is that if you want to clean your drain, you don't have to give up being green: there are some highly efficient homemade uncloggers that will work wonders when used properly.

Homemade Drain Cleaners That Are Effective

Most of the unclog and clean drains DIY cleansers listed below are helpful against both types of drain obstructions.

To Be Remember: If the pipes are composed of PVC, Pex, or CPVC, DO NOT pour boiling water down the drain because the joints may melt. If you have a porcelain sink, be careful not to pour boiling water (or extremely hot water) straight on it, as this can produce a crack.

This is probably the most popular natural way to unclog a drain (and on the cheap). It can work miracles in most cases, but you must apply it correctly or you will not get far with it.

Baking soda (sodium bicarbonate) is a basic, whereas vinegar is an acid in terms of chemistry. When the two substances are combined, carbon dioxide gas is produced, resulting in an explosive reaction.

When we use baking soda and vinegar to unclog a drain, we take advantage of this phenomenon: the pressure caused by the chemical reaction causes the clog to break up into smaller pieces (or at least it will loosen up the blockage).

Then just flush your drain with hot water to remove the microscopic obstruction particles from your drainage system. In most cases, a one-to-two ratio of baking soda to vinegar yields the optimum results.

This homemade cleaner is particularly efficient against clogs that are largely made up of grease or greasy things, therefore use it on kitchen sinks for the greatest results. Dish detergent and hot water, on the other hand, aren't likely to assist you unclog a hair-clogged drain.

The dish soap helps the process by dissolving the fat molecules in the water while the hot water melts the built-up grease in the pipe. This method allows you to remove a significant amount of fat from the drainage system, which is obstructing the flow of water and narrowing the pipe's diameter.

One of my favorite natural drain uncloggers is this combination. It has assisted me and several of my friends in cleaning a clogged kitchen or bathroom sink pipe. This homemade approach is not only efficient against obstructions, but also against foul drain odors.

Salt and baking soda are two natural compounds that can work wonderfully in a variety of situations.

Baking soda and salt loosen and soften the blockage, which can then be removed by flushing the drain with hot water.

This is another good combination: the acidic vinegar complements the salt perfectly. Most forms of blockages in a drainage system will be removed by their synergistic impact.

Both substances have antibacterial qualities, so you'll be able to kill two birds with one stone: the mixture will not only clear the clog, but it will also eliminate bad odors.

The salt and vinegar mixture loosens the built-up debris and breaks it down into smaller pieces, while the hot water removes the clog's leftovers.

HOW MUCH DOES IT COST TO GET DRAINS CLEANED

Cleaning a clogged drain costs $130-$180 on average in the United States. This includes both the expense of locating the clog and the cost of clearing the drain. Most plumbing contractors charge a set rate of $50 to $175 for an initial visit, which includes the first hour of service.

While many plumbers charge an hourly rate to unclog a clogged drain, others have set rates for typical tasks like drain cleaning. The cost will be determined by the type of clogged plumbing fixture and how difficult it is to access it.

Also, read how to unclog toilet and another clogged plumbing naturally before you call a plumber near me.