Your toilet should be a private area which it can be uncomfortable to ask for help when you've accidentally clogged toilet. 2022 Therefore, it is important for the house owner to know how to unblock toilet naturally and call a plumber near me. However, it is not only about the uncomfortableness that you feel but also the cost of plumber is not cheap. 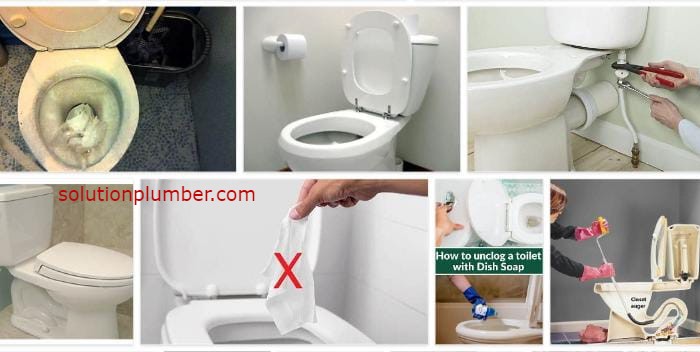 HOW DO TOILETS GET BLOCKED?

Before we jump over on how to unblock a toilet, it´s better to know how do toilets get blocked first. Here are the following items that you should not do to your toilets;

Using too much tissue or toilet paper and throwing all of them into your closet it is possible they get stuck in it. If you need to use them much, throw them little by little into your toilet. İnstead, throwing them into the toilet bin is better.

The Sanitary pad has a thick and dense texture. It can make a blockage in the water pipe from the toilet.

As sanitary pad does, cotton pads/balls and cotton earbuds do the same that has guaranteed to block your toilet.

Although these flushable wipes are toilet friendly, it is possible for the toilet to clog due to this. just like a tissue, use in large quantities and immediately throw it into the toilet together.

Ground food compacts over time, resulting in a toilet clog or (worse) a pipe blockage somewhere down the toilet line.

You might be able to get away with pouring old food down the loo once in a while, but if you use your toilet as a food waste disposal system on a daily basis, don't since it'll only get blocked again.

HOW TO UNBLOCK TOILETS AT HOME? 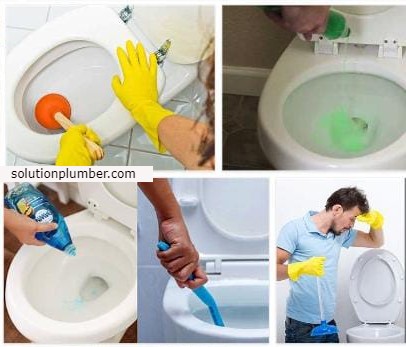 This job might seem dirty and smelly but if you it is easy to do once you know. So, the following tips below are the simple ways how to unblock the toilet;

First of all, you should turn off the water supply to the toilet to prevent the chance of flooding. This is easily accomplished by locating and closing the toilet 'flapper' in the cistern tank.

Make sure everyone knows that there will be no water supply until the toilet is unblocked.

Get ready yourself with an appropriate toilet plunger, A pair of long rubber gloves, something that is able to catch any spilled water such as an old towel, and a face mask. It is also better to open any ventilation.

After Putting on your long rubber gloves, a face mask, cover the area around your toilet with towels or something to absorb any possible water spills.

Next, to make the plunger more effective, run it under the hot tap first to soften the rubber. To generate a vacuum, place the rubber end of the plunger tightly over the toilet bowl. Grasp the handle and dive forcefully, be careful not to splash water on yourself or the floor.

This step hopefully can drain your toilet well. But, if after several minutes of plunging the water, it hasn’t shown any improvement, let´s try another option.

HOW TO UNBLOCK A TOILET WITH HOT WATER

This option is the simplest way how to unblock the toilet. All you need is just heat the water for about one bucket and pour it into your toilet. Wait a few minutes to see if it helps to clear the clog.

When the water starts to drain, you'll know your efforts were successful. Then flush the toilet a couple of times. In many cases, simply running hot water will dissolve whatever is causing the blockage.

HOW TO UNBLOCK TOILET WITH CAUSTIC SODA

Caustic soda is a dangerous chemical that, if handled improperly, can cause serious injury. It's critical that you make your caustic soda combination in a secure location where you won't be disturbed by children or animals. Also, put on gloves, put a face mask on, wear eye protection, and do not make any physical contact with your open body part.

Next, prepare 1 kg caustic soda mix with 4,5 liters of water in the bucket. Then stir with a wooden spoon until it begins to bubble. At this moment, fumes will be released, so keep your mask on. Don't get too close to the bucket and keep a safe distance.

Then, pour the mixture into the toilet slowly and gently and wait for an hour. After an hour, pour the toilet with a bucket of hot water.

HOW TO UNBLOCK TOILET WITH WASHING UP LIQUID

The common washing-up liquid should be used initially to unblock your toilet if you don't have a plunger. Pour half a cup of water into the toilet, trickling it around the bowl in a ring around the waterline and then crisscrossing the water itself.

Allow for half an hour to completely dissolve the clog, then fill your bucket with hot water and pour it into the toilet from around waist height to help release the blockage.

After waiting about 10-15 minutes, you can flush the toilet. It will be guaranteed to completely remove the blockage.

HOW TO UNBLOCK TOILET BAKING SODA AND VINEGAR

When you pour these two chemicals into your toilet, they will start to shake. The chemical interaction of baking soda with vinegar causes this shaking.

Allow at least 5 minutes for the soda-vinegar mixture to function properly, as this will allow them to perform their job. Finally, you can pour hot water into your toilet.

Finally, those are the tips on how to unclog toilet. If your toilet is still stopped after several attempts to unclog it, you should get professional plumber or licensed plumber.

The best approach to prevent your toilets from becoming blocked in the first place is to clean them properly and on a frequent basis. It's far better to avoid these problems from occurring in the first place than to have to deal with them later. For more resolving tips how to unclog a toilet and another clogged drains, read how to unclog and clean drains to solve and prevent the problem immediately.